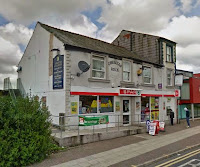 This pub on one of Bolton’s main radial routes has now been converted to a Spar convenience store, but retains its distinctive frontage lettering and a sign on the end wall advertising the former facilities – which manages to spell its name incorrectly!

Email ThisBlogThis!Share to TwitterShare to FacebookShare to Pinterest
Labels: Lancashire 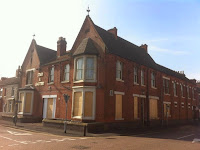 A large redbrick street corner pub with a pair of distinctive gables, still open (although up for lease) on the 2010 StreetView image.

This pub was closed following a fire in 2007, and later bought by the Co-op, who flattened the site with the intention of building a shop on it. However, they subsequently bought the Lord Nelson opposite, which is on a bigger site and which they were able to convert to a shop using the existing building without needing planning permission.

Email ThisBlogThis!Share to TwitterShare to FacebookShare to Pinterest
Labels: Lincolnshire

A prominent corner pub just north-east of Stoke-on-Trent city centre that was once popular with Stoke City fans on matchdays. Clearly the introduction of cask ale – as advertised on a banner – failed to save it.

Posted by Curmudgeon on Thursday, June 12, 2014 No comments: 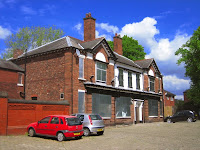 A large pub with an attractive cobbled forecourt in a well-populated area of terraced housing. Recently closed by Robinson’s Brewery as part of their cull of under-performing pubs and apparently destined for redevelopment as yet more housing. Still open – and looking quite appealing – on StreetView.

Email ThisBlogThis!Share to TwitterShare to FacebookShare to Pinterest
Labels: Cheshire 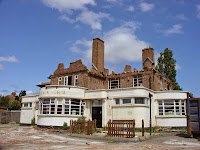 A large inter-wars pub in the Art Deco style on the main A444 road south out of the town heading to Nuneaton. Still open on StreetView in 2009, although looking rather tatty, but as the picture shows it deteriorated rapidly and the site has now been redeveloped for housing.

Posted by Curmudgeon on Thursday, June 05, 2014 No comments: